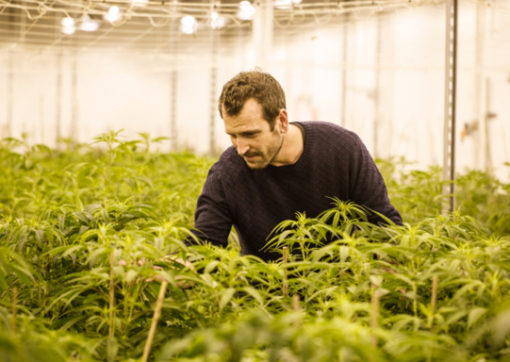 Good Chemistry founder/CEO Matt Huron’s story in horticulture begins with his grandparents who were farmers before settling in Worcester, Massachusetts.

“I spent a lot of time with my grandparents when I was growing up,” he explains, “and they really instilled in me a passion for agriculture, and the feeling that comes with building and growing something special.”

The benefits of cultivation became evident to Matt in 1996 when his father and his father’s partner were diagnosed with HIV/AIDS in San Francisco. In 1996, when medical marijuana became available in California, he saw firsthand the symptomatic relief patients experienced from this alternative medical treatment. In 2000, he began growing medical cannabis for patients throughout the Bay Area, founding and operating a nonprofit medical cannabis co-op.

Seeking an established, regulated market, Huron moved to Colorado in 2009, where regulation and legislation were being created for the developing medical cannabis industry. He co-founded Wellspring Collective which originally catered to seniors with health challenges.

Good Chemistry Colorado launched in 2010, and is now considered to be one of the finest vertically integrated cannabis companies in the country. Since opening Good Chemistry Colorado, Huron has expanded cultivation operations in four Colorado facilities and one Massachusetts facility devoted solely to the production of ~75 strains of marijuana. Today, Good Chemistry employs a staff of more than 250 individuals across three states (Nevada, Colorado, and Massachusetts) in dispensaries, cultivation and corporate operations.

Matt also wanted to share his knowledge and experience in the cannabis industry. He served on the Colorado Department of Revenue’s Medical Marijuana Enforcement Division’s (MED) Licensing Authority Advisory Committee, and continues to add his voice to the foundation and future direction of the medical and adult-use cannabis industries. He is a founding board member of Colorado Leads, Marijuana Industry Group (MIG), Cannabis Business Alliance (CBA), and the National Cannabis Industry Association (NCIA).

Continuing his grandparents’ commitment to craftsmanship and production excellence, Matt Huron’s story is just beginning. He is constantly looking for ways for improving best practices, policies and procedures, and cultivation. Huron has developed and implemented best practices in the medical and retail marijuana industry, including a compassion care program that enables patients with limited resources to obtain medical marijuana at an affordable cost.

Huron has collaborated with local leaders and law enforcement to enhance neighborhood safety and security. His enforcement of policies and procedures throughout the company has ensured strict compliance with state and local regulations.

Huron has a bachelor’s degree from the University of California, Berkeley.